A downloadable game for Windows

This was created for the NES box art jam, I decided to use the box art from 'Adventures Of Lolo' to create this game. I have not played that game before, so I thought it would be fun!

It was my first game jam, and I have learned a lot from it. I still wish I could add on a little bit more to this game, but I think it is in a very complete form.

It is based around the old style games, I only used 16 by 16 tiles, and used only 4 colours on each tile (even transparency counts as a colour!) I also made sure to use the nes colour pallet

I also only used 8 bit sound effects, and played around with SDL_Mixer, and made it only play low quality sounds as output. (No matter what audio file I use).

I created the game as a platformer, because when I was looking at the box art, I sort of felt that this is that type of game. I am not sure if I was correct or not, but that's the whole point of the box art jam, isn't it?

Anyway, there are a few things I would have added if I had more time like more levels, more art, more enemies and more characters, but no matter what, I feel like I have added enough to make this game pretty awesome.

I have used my own engine for this game, it runs with OpenGL, Box2D, SDL, SDL_mixer, and my own font rendering library

It was a lot of work and dedication, and I really had a great time making it, so I hope everyone who plays it will enjoy it as much as I have!

Just extract the Zip anywhere on your computer, then launch the AdventuresOfLolo.exe file!

This Lolo game is a platform game, when the trilogy of Nes Lolo games were mazes with puzzles, that is, dungeons.

Firstly, well done for your first jam! I can see you put a lot of work here. There's some effort in level design and the nes aspect (graphics and sound). It's a choice you made and it's consistent!

The game is pretty hard though, I had some difficulty with the character that slides, especially as you ask for some really precise jumps. I never felt totally in control which is really important for a platform game. Nevertheless, it's just a question of tweaks in your movement physics, and maybe players would just be used to it as the game goes on (it's too short here to figure it out).

It also lacks some little background story and music but overall it's a pretty nice game, and with some potential above all! Congrats.

I'm glad you played it! I know there's no story or music, I was planning on adding some story, but I never had time because setting up Box2D took up my first week of development :(
As for the character controller, I admit, I do agree with you, and there are definitely a few things I could do to make it feel a lot better, but I guess as I got better at playing the game, I forgot it needed tweaking :p.

Anyway, I really appreciate the feedback, it means a lot :D 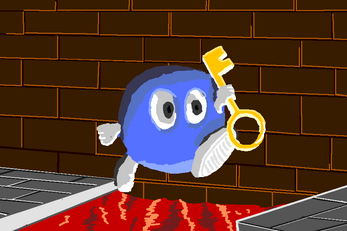